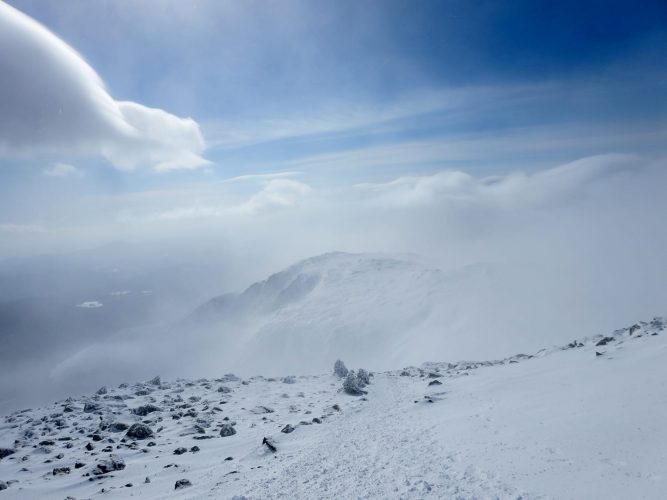 It’s maybe 3 a.m. I got started later than I wanted to – way later. I’ve slept a grand total of two hours in two nights and those two hours happened to be from about midnight to 2 a.m. right before we began our ascent. So, it’s been slow going from the start.

The stars and moon in the black wilderness night sky are tremendous. I take out my phone to snap a picture of the incredible night sky but it’s of no use – the picture shows nothing but black with a few faint specks of light. You just can’t expect a photo to explain what’s it’s like to be right here, right now.

It’s August, and we’re heading up to the Red Banks on Mount Shasta’s main route. The snow and ice slope is fairly steep but feels even steeper than it should. I’m in the middle of the pack with, two climbers ahead of me and at least one behind me as we weave our way up to the chutes.

Finally, I start to get in rhythm, the steps are coming easier, and the slope seems less steep. But then, suddenly, I’m startled awake from my semi-meditative state.

The voice is coming from up above, ahead of me. It’s a member of my climbing team. I stop, look up and see it. It is definitely a big rock and it definitely looks like it’s coming right at me. I step off to the side, but, honestly, don’t have much time to move all that much.

Another member of my climbing team, who was below me (and off to the side a bit) on the slope at the time, might have more reliable details but my memory has it is a small-car-sized rocked that missed me by maybe 10 yards. Personal memories tend to have larger rocks and closer encounters, so the size and distance may have been slightly different. But, regardless, it was indeed a close encounter. The rock would have crushed anyone in its path.

A few words are exchanged about the status of everyone on the slope. All is well.

Continue up to the Red Banks.

Myth: Mountaineers have a death wish

The general public can’t really be blamed for having this type of thought process. The vast majority of media reports are about death and despair on the mountainside: Features about unqualified climbers strapping on crampons for the very first time at 20,000 feet on Mount Everest and the ensuing tragedy that entails, news about solo climbers lost and never found again, that wild, unprepared person who did that wild thing on the mountain with no preparation, etc., etc. etc.

”Getting to the top is optional. Getting down is mandatory.” Ed Viesturs

Meanwhile, news of Ueli Steck safely soloing Annapurna’s south face, or news of yet another safe expedition to an 8,000-meter peak by Ed Viesturs go largely unreported by the media and unnoticed by the public.

Truth: Mountaineers have a strong desire to live

Generalizing any group of people is almost always a mistake, as there are always exceptions and there are always outliers, but I’ll do it anyway: Mountaineers do not have a death wish, but rather have a strong desire to live life to the fullest.

Now, I understand that mountaineering is not for everyone. There are certainly people who want nothing to do with mountaineering – who have no desire to spend time on mountains – who also live life to the fullest, but my point is that those who do call themselves mountaineers often climb mountains to feel alive, and to live well in the process.

In order to figure out the whole mystery behind mountaineering (or lack thereof), all one must do is start asking the question: Why be a mountaineer?

“When we tug at a single thing in nature, we find it attached to the rest of the world.” John Muir

Is there an element of risk involved in climbing mountains? Of course there is. Is there not also risk in putting on that seat belt and driving to pick up milk and eggs? That rock that tumbled down the Red Banks – could that not be that truck changing lanes with you in the blind spot on the highway?

Life itself is laden with risk but I don’t really want to get into that right now. We’re talking mountaineering and we’re talking about mountains and, more specifically, about climbing them. I’ve been fortunate to meet very good people who call themselves mountaineers. None of them, to my knowledge, have a death wish. To the contrary.

2 comments on “Mountaineering: Dispelling the Myth”