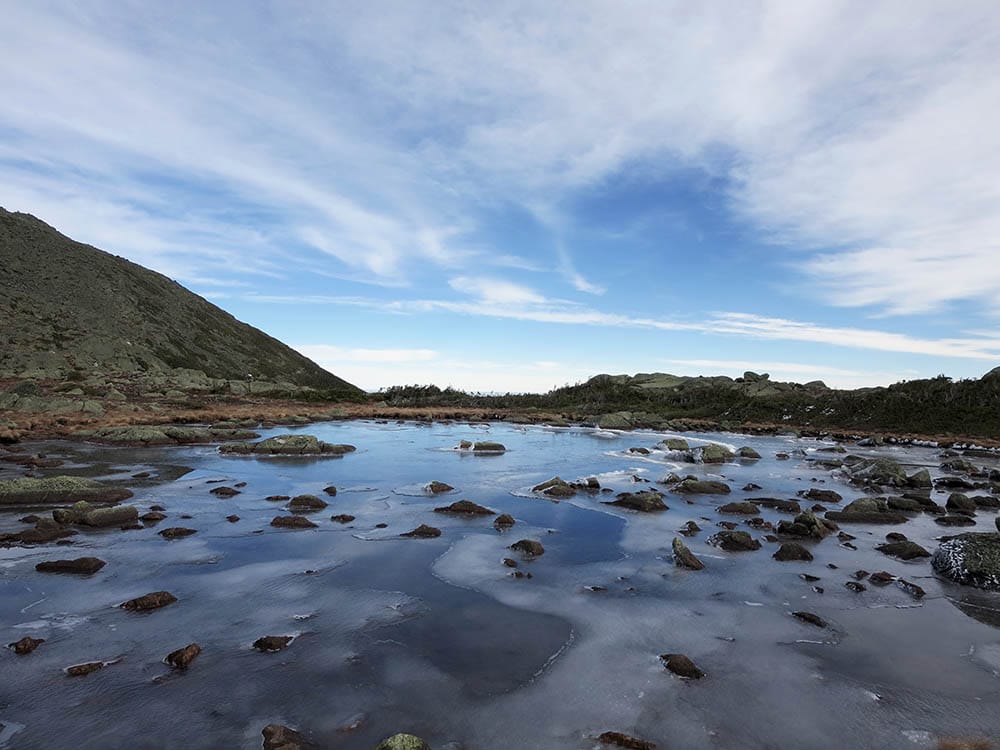 Mount Jefferson via the Six Husbands Trail (and Mount Adams, too)

You know that hike or climb that is so rough that, when it’s over, you yell at yourself “never again!” — maybe just in your head but you are YELLING at yourself. [I NEVER DID UNDERSTAND ALL CAPS PEOPLE UNTIL JUST NOW!] But, back on track here … you’re cursing yourself for doing this one climb and saying never, ever again, I’m getting as far away as I can. Then, of course, 12 hours later you’re already plotting your next trip out there. You know that one?

Yeah, this is THAT hike.

Summit Mount Jefferson and Mount Adams via the Great Gulf Trail, Six Husbands Trail, Gulfside Trail, Star Lake Trail, Osgood Trail (and a few others), and you’ll both love it and hate it — sometimes at the same time.

WWPSS (What would Patrick Swayze say?)

I knew I was pushing my luck hitting up a notoriously difficult trail in New Hampshire’s White Mountains in late October. Winter in these parts has no clear start or end. But this is the infamous Six Husbands Trail, so one must be prepared for anything, and, remember, pain don’t hurt.

The trail wound past a number of junctions, with other trails that I’ll likely check out in future climbs, but stayed the course. Daylight was at a premium for this last fall hike.

At the 4.5-mile mark, I reached the Six Husbands Trail, ready to begin the notorious stretch filled with steepness, awesome ladders bolted into rock and who knows what else. I didn’t have to wait long for the shenanigans to begin.

Shortly after getting on the Six Husbands Trail, I reached a river crossing that was too iced over for rock-hopping. I checked every possible route across exposed rocks but the rocks were too iced over. I ended up taking off my boots and socks and crossing the icy stream barefoot. After about a 30-minute total delay due to the crossing, I set foot back on trail.

It didn’t take long for my feet to warm back up — the trail started turning steep in short order. 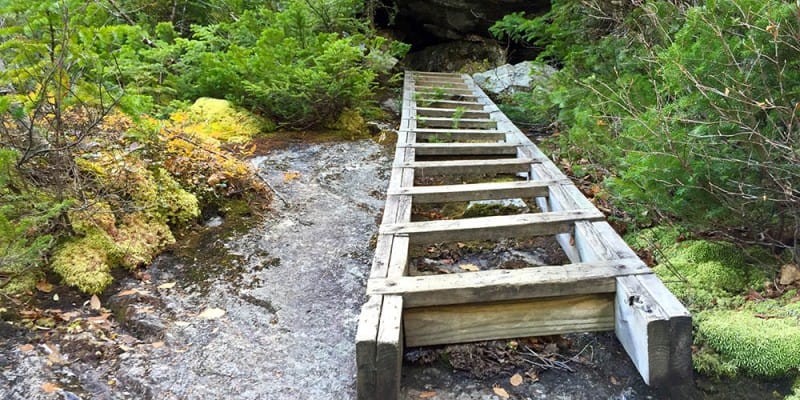 Soon thereafter, the ladders appeared — a welcome sight on this icy morning. I slowly ascended the rest of the Six Husbands trail to the summit of Mount Jefferson and came across the first other hikers of the day enjoying the views up there.

From Jefferson, I connected with the Gulfside Trail and then took a small spur trail up to the summit of Mount Adams for more expansive views and a little time spent with other hikers enjoying the view.

I opted to take the Star Lake Trail down from Adams, as it would give me the opportunity to go for the summit of Mount Madison, too, time permitting. 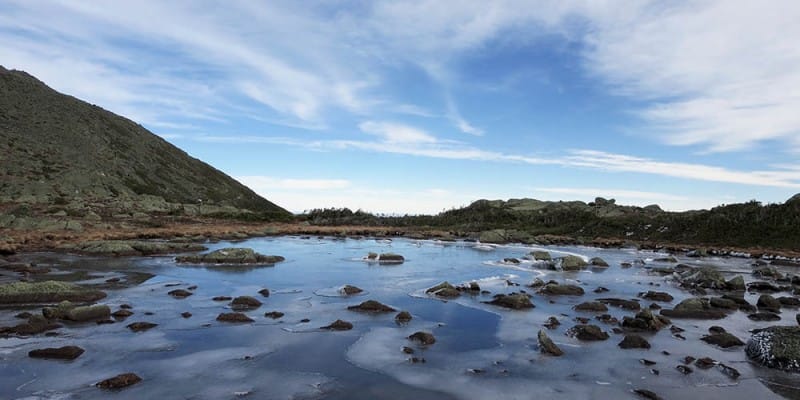 No time for Madison

I had hopes to add Mount Madison to loop and bag three summits, but decided to cut it out due to dwindling daylight. I hit the Parapet Trail until it connected with the Osgood Trail, and then slogged down Osgood all the way back the Great Gulf Trail as my legs started to scream at me for the 5,500 feet of elevation gain and loss in less than 10 hours. The final 1.8 miles back to the trailhead were uneventful as the sun set. 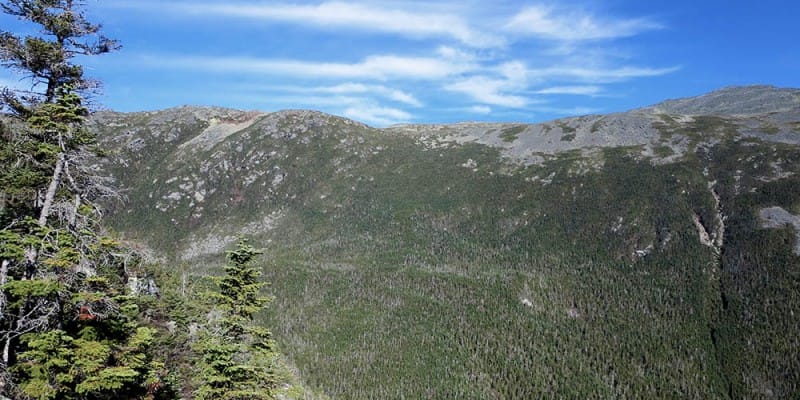 See my Six Husbands Trail route description for more details about the route.

Weetamoo, Queen of the Pocasset tribe

Not only is the Six Husbands Trail awesome, but it has an awesome name, too. The trail is named after Weetamoo, Queen of the Pocasset tribe, who had a bunch of husbands. Can you guess how many? If you just got that wrong, leave. Seriously, leave. And never come back.

Weetamoo is a storied leader who also was known to be a skilled outdoorswoman. There are a number of landmarks named in her honor, in the Northeast, including Mount Weetamoo, Weetamoo Falls, Weetamoo Trail, and Weetamoo Woods.

Getting to the Great Gulf Wilderness Trailhead

See my Six Husbands Trail route description for details on how to get to the trailhead.

Don’t like the Brady Bunch? Good, here’s an analogy: So, Mount Washington is the older brother (Greg Brady), and Mount Adams is the baby brother (Bobby Brady) who gets all of the attention. What does that leave? Why Mount Jefferson, of course, as the forgotten middle child, aka Peter Brady. i.e. A ton to offer, but often overlooked. Bad analogy? That’s OK, because Jefferson is good enough to make up for that. 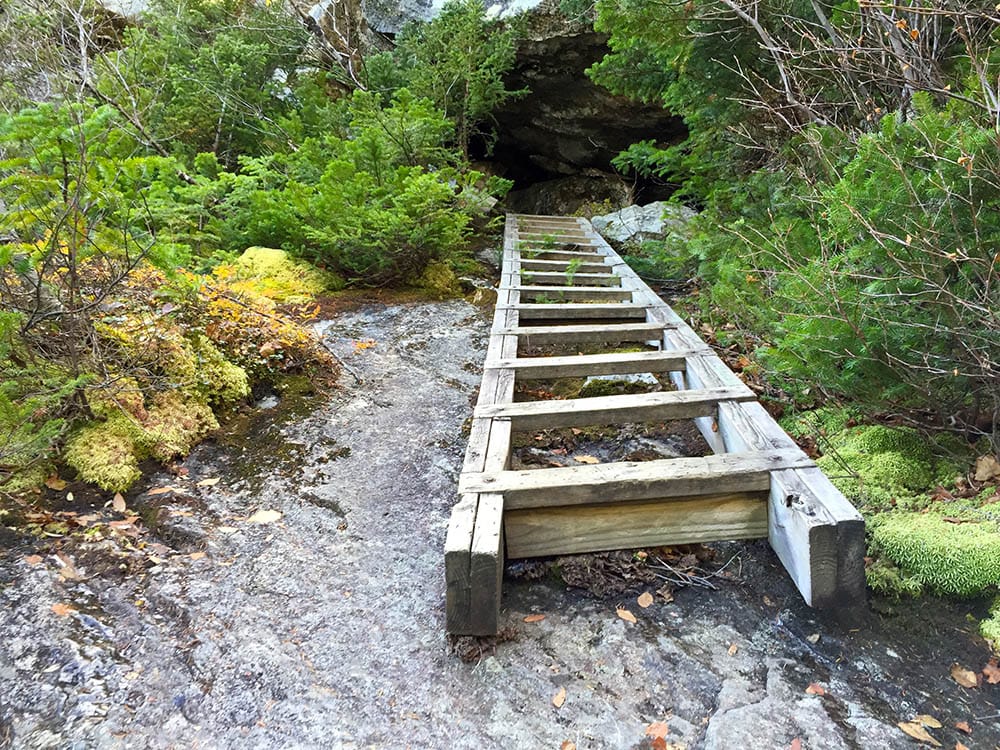 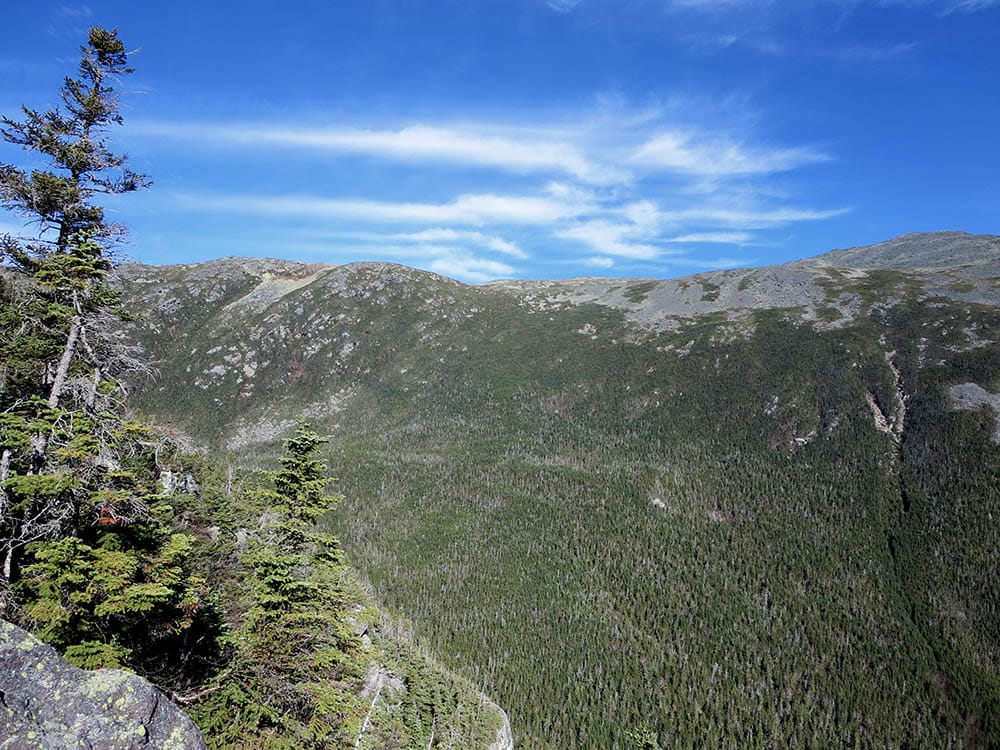 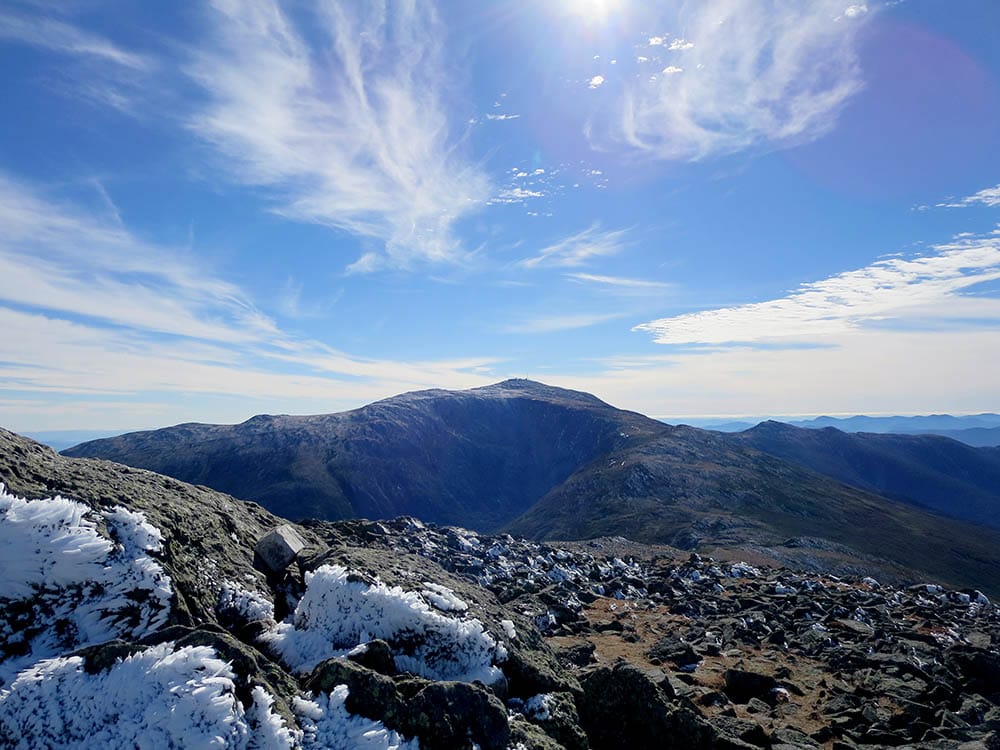 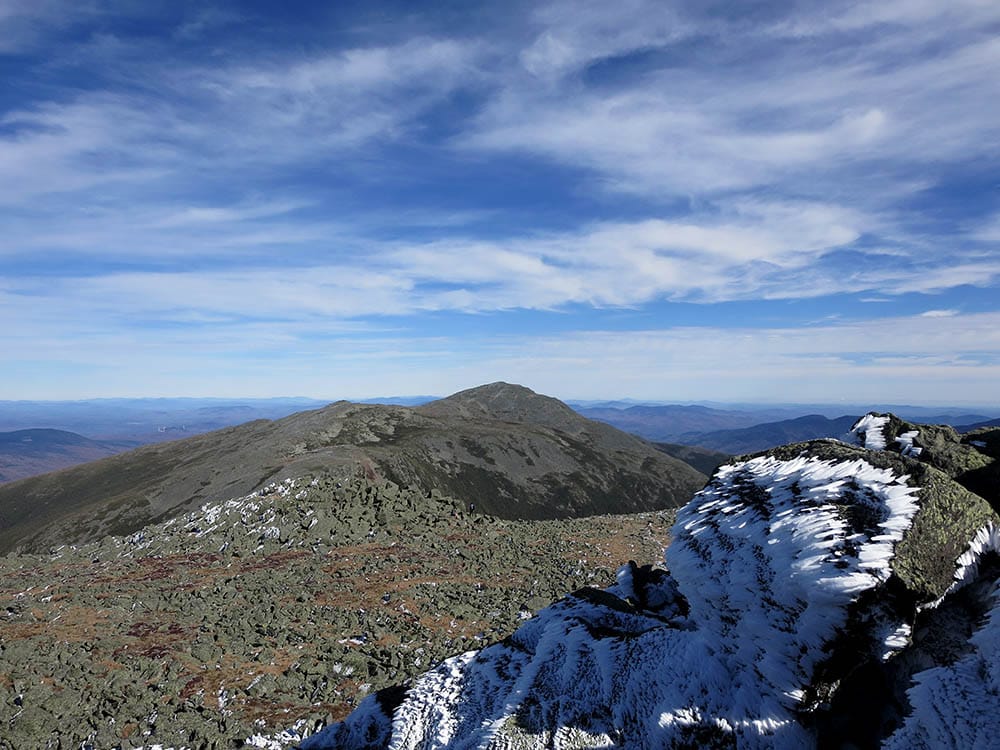 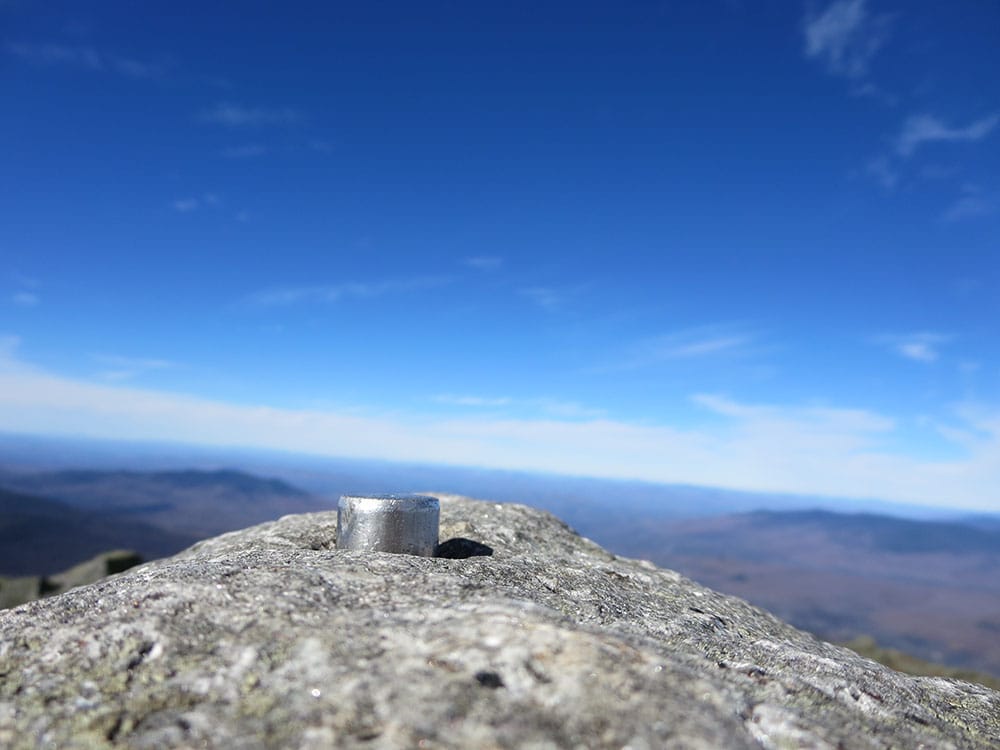