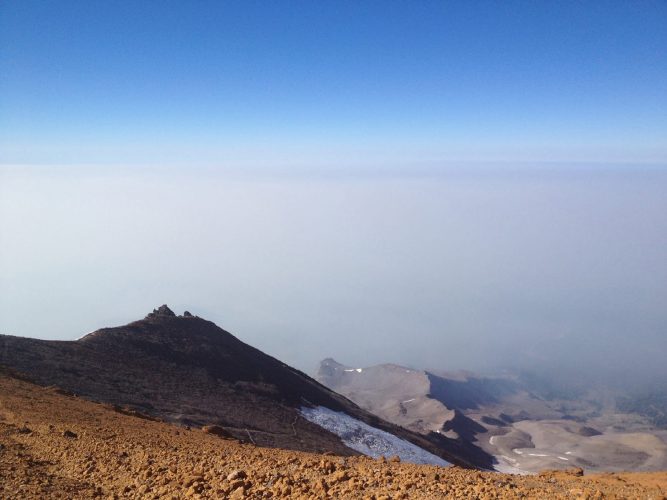 My climb of Shasta in August 2012 had snow, ice, hot temperatures, cold temperatures (mostly hot, thought), sun, wind, and a little more sun and wind. On top of that, the views from the mountain were largely obscured by bad wildfires in the surrounding areas.

Up to Lake Helen

Sleep proved tough to come by on this trip up Shasta’s Avalanche Gulch Route, so even adding that extra early night at Horse Camp did me more harm than good. We headed up to Horse late the first night and got an early start up to Lake Helen the next morning.

The trail leading up to Lake Helen from Horse Camp was 100% loose scree. With the scree, increasing August temperatures, lack of sleep and quick elevation change from near sea level, I was feeling it. Still, our group made it up to Lake Helen in a couple of hours and set up camp. Going early was a smart move but it also left us hours of trying to find cover from the sun. On the flipside, it also gave us plenty of time to melt snow for water.

After a lot of lounging, a ton of melting snow for hydration, and a couple hours of sleep, we started up toward the Red Banks at about 3 a.m. About midway up the snowfield leading to the Red Banks, a rock broke loose and came tumbling down. This late in the season, portions of the snowfield had melted out (especially lower sections), so the rock jarring loose in the early morning hours was not a good sign. Nonetheless, I continued upward.

Reaching the base of the Red Banks, I sat down to get some food and water in my system before heading up the chutes. It was still night at this point but morning was quickly approaching. The climbing was relatively quick going up the chute. The ice was pretty thin in certain sections – I could hear water running under some spots – but overall the climbing was uneventful, until…

Until my right crampon broke.

Problems in the chutes and beyond

More specifically, a strap on my right crampon snapped (it had been damaged previously), the crampon fell off, I fell, and then self arrested. I was able to self arrest with my ice axe in just a few feet, and then lodged myself between a couple of protruding rocks from the surrounding walls to attempt a fix on the crampon.

Knots and duct tape ended up doing the trick, but the crampon remained a problem throughout the remainder of the climb (when it was needed). I slowly made my way up to flatter terrain. This remains the only time I have ever had to truly self arrest on a peak.

At this point, the route was supposed to be straightforward at this point … what was I missing? I had studied the route over and over before the trip and had even refreshed my memory on the plane only a day earlier. The only map of our group wasn’t with me, and I was climbing solo at this point. After about a 20-minute detour in the wrong direction, I realized my error and turned back to figure out where to head next.

Misery hill was right there, I saw it, but for some reason my brain wasn’t putting the pieces together. Why? The lack of sleep? The problems on the ascent just below? I decided that it didn’t matter why. What mattered was whether it made sense to continue on. Before long I kept heading upwaard and found the correct path.

The infamous Misery Hill ended up being quite tame in comparison to early morning, and I was able to cover the last portion of the climb relatively quickly. The section leading up Misery Hill to the summit turned out to be the best part of the climb.

Summit and back to camp

I met a few other climbers up at the summit and talked with them about the conditions and routes. The descent was relatively uneventful, barring a few more head-scratching route-finding moments. A couple of things were certain: 1) I was definitely glad to have gotten the early start (albeit slightly later than hoped) on the way up. With each step down the snowfield back to Lake Helen, I sunk deep into the now-softened snow as the sun beat down relentlessly. 2) I would never again make the mistake of not having my own map. A dumb mistake, but easily correctable for future climbs.

Arriving back at my makeshift camp, I was exhausted and took an extended break.

I couldn’t wait to head back to Horse Camp from Lake Helen, mostly because of the fresh water supply there. Despite the hours of melting snow for water the previous day, I was running a little low. This climb of Shasta happened during one of the final days of summer where heading up the chutes would be considered safe. I didn’t sleep much, encountered multiple problems on the trail, contended with hot temperatures and melting ice and also had multiple route-finding issues.

In the end, it was a memorable trip that included a lot of valuable lessons. Every time I climb a peak, lessons are learned – sometimes more so than others. 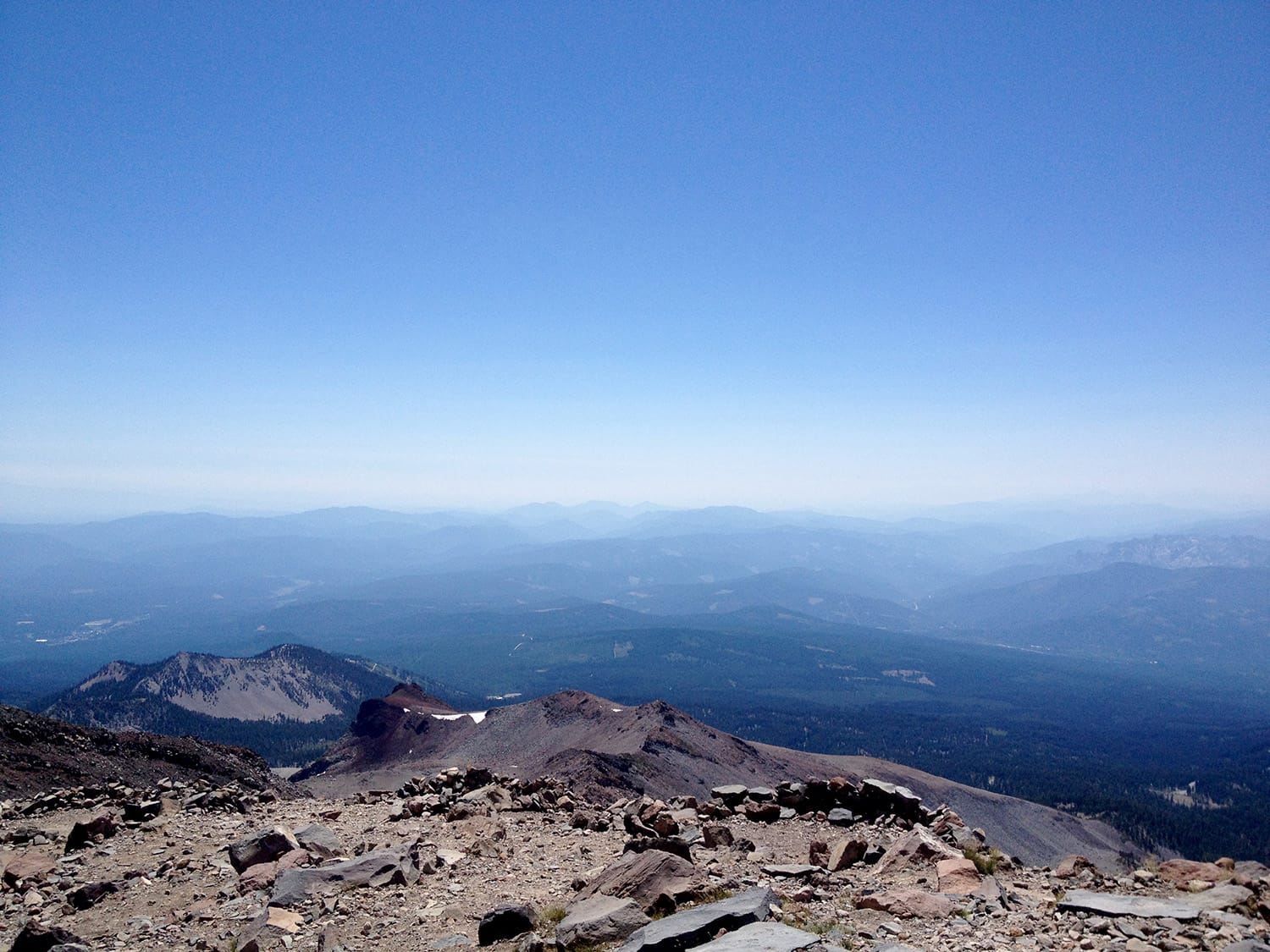 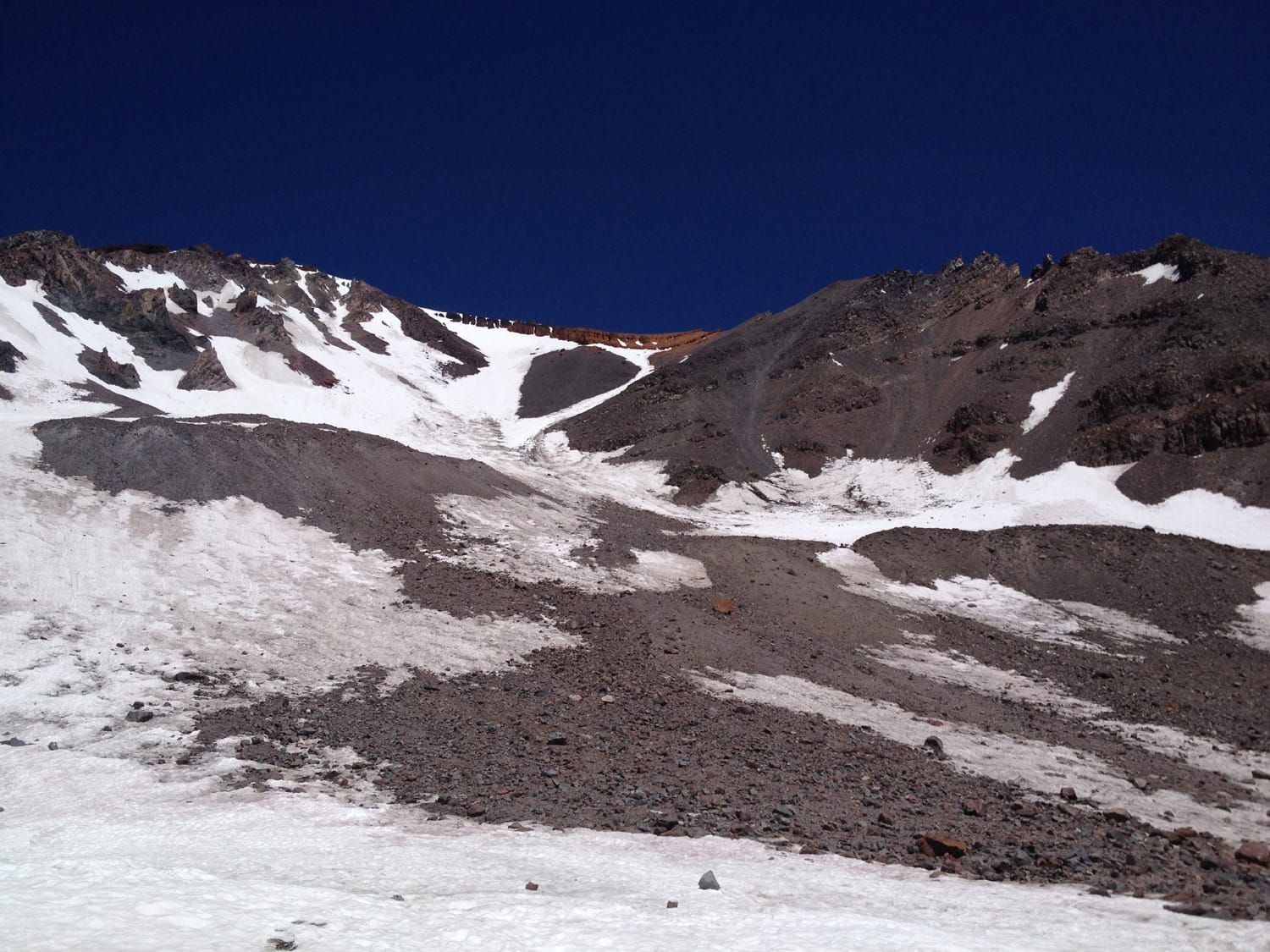 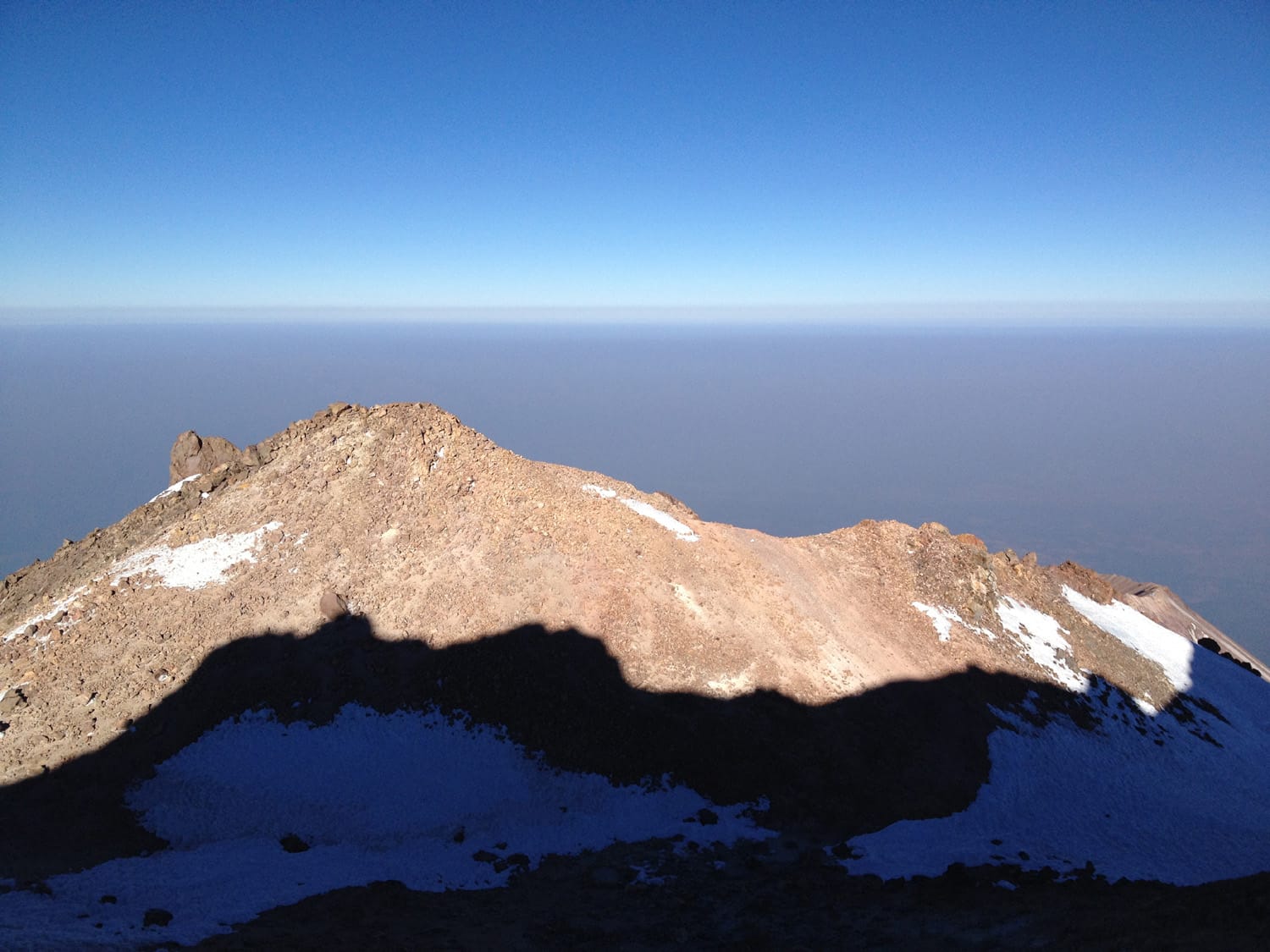 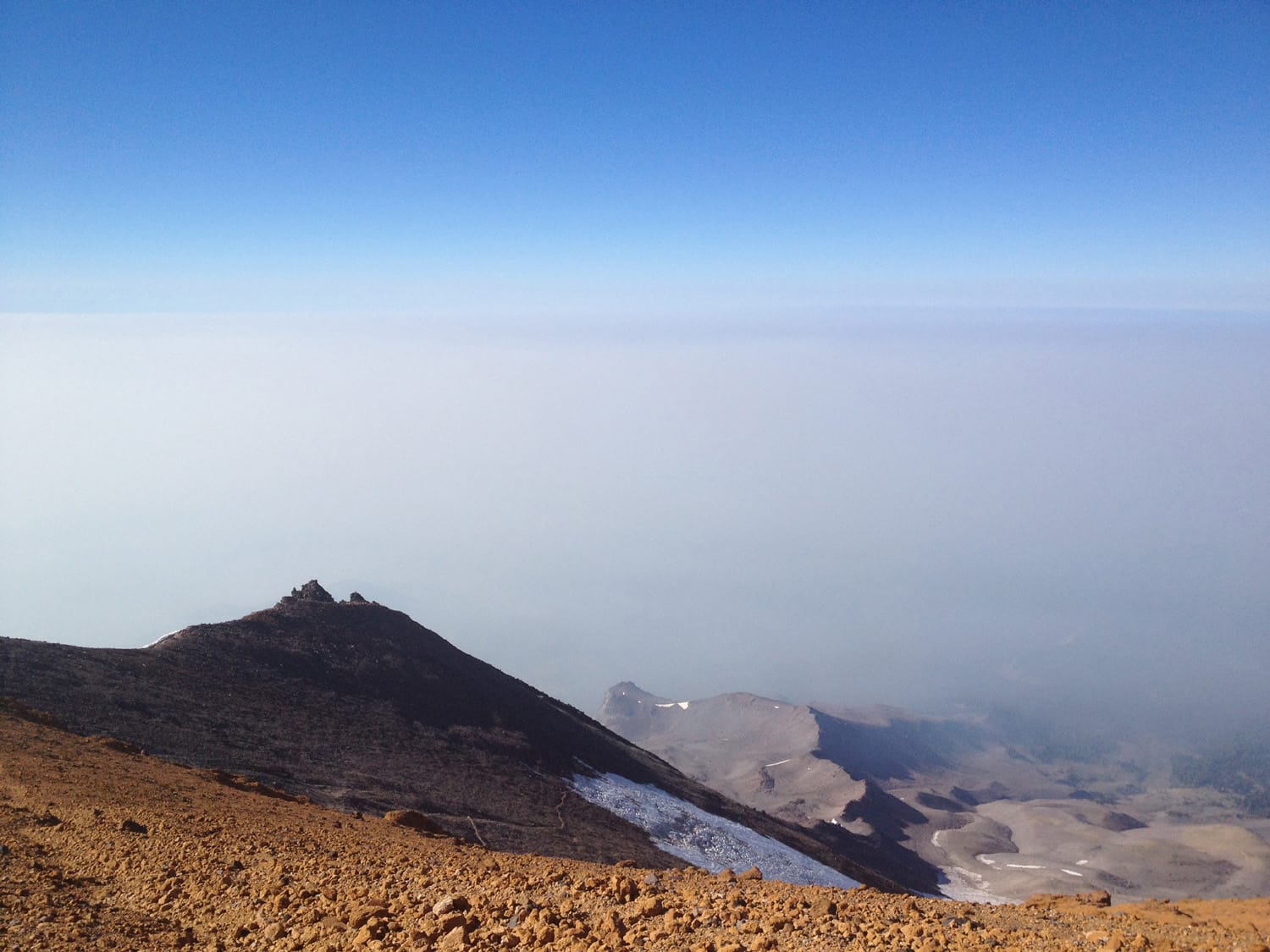